Perched on a grassy knoll, a scrum of schoolchildren spot the aircraft’s lights, high up in the shimmering afternoon heat. Seconds later, the Cessna 208 Caravan touches down on Tshikapa’s newly rehabilitated airstrip, sending a cloud of red dust skyward as it taxies in.

Not so long ago, landing in this fertile corner of central Democratic Republic of the Congo was a rocky and, during thunderstorms, sometimes perilous ride, with high winds sending waves of water across a muddy track.

But today, the airstrip has gotten a US$326,000 facelift, built by World Food Programme (WFP) engineers and financed by the WFP-managed UN Humanitarian Air Service, or UNHAS. As a result, UNHAS flights to Tshikapa – capital of DRC’s impoverished but diamond-rich Kasai province, abutting Angola – have increased from one a week to three.

The landing strip on red earth (laterite) is not just assuring vital humanitarian assistance reaches the region’s most vulnerable people. It is opening up broader economic opportunities — even as UNHAS’s service to the Kasai region is threatened by funding cuts.

“This will really improve transport in our province, not just humanitarian but also commercial,” says Dieudonné Pieme, the Governor of Kasai, who is considering whether to pay for paving the airstrip as an extra step. “It can help improve people’s lives in Kasai in a really meaningful way.”

Meet the women behind WFP’s humanitarian helicopter in Haiti

At Tshikapa’s tiny airport, Francois Kasungila, who runs it, predicts airlines that abandoned the region will soon be back, bringing passengers and business with them.

“I want to thank WFP for this support,” Kasungila adds. “It has been so important for this airport. Before, the runway was in disastrous shape.”

Tshikapa’s airstrip counts among other crumbling runways and shorter landing strips UNHAS hopes to restore across Africa’s second largest country, and one of the most inaccessible.

Flying across DRC offers stunning vistas of rainforest, grasslands and rivers. Yet the dearth of roads, rail and other transportation infrastructure is a major development handicap, helping to fuel widespread poverty and hunger – 27 million people are severely food insecure.

Kasai province, still recovering from a 2016-17 conflict, and served by a patchwork of cratered roads and dilapidated bridges, is a case in point. It has one of DRC’s highest rates of hunger and malnutrition. In some places, just 4 percent of children aged under-2 eat what is only a minimally acceptable diet.

Still, Kasai’s vast economic potential is on display in boisterous downtown Tshikapa, where women hawking maize, groundnuts and manioc compete with a cacophony of motorbikes. Angling for business too are myriad diamond traders, with names like American Ninja.

Most of Kasai’s small, artisanal diamond miners have not struck it rich, however. At a WFP-supported health centre in the city, Fançois Tshimanga, 37, cradles his 2-year-old daughter Kapinga, who is recovering from malnutrition.

“Business is not good,” says Tshimanga, a father of six, who digs for diamonds on the banks of Kasai River. The last one he discovered was in 2005. He sold it for US$100.

“I need to find other work,” he says.

At her home a few kilometres away, farmer Mushia Mokange, 51, also faces hard times. She can only afford to feed her family once a day. Today’s meal was a stew of manioc leaves.

“Farming is difficult,” she says, staring out at her small patch of maize. “And we need to eat to be able work.”

“There’s a serious problem of malnutrition in the area”, says Wivine Mananga, a WFP nutrition officer in Tshikapa, “the population works in mining and agriculture. But it can take 10, 15 years to find a diamond. And many farmers don’t have land, fertilizer or training.”

WFP is keen to act – stability is slowly returning to the broader Kasai region. Working with partners such as the UN Food and Agricultural Organization, WFP is shifting from delivering emergency food assistance to rolling out farming and other resilience-building activities – interventions that aim to empower people over the long term.

Ease of access is key to such efforts and, indeed, the broader range of WFP’s humanitarian response.

“We reach up to 300,000 people a month with food assistance in Kasai province,” says WFP Tshikapa Office head Tiopini Konate. “The runway helps.”

Other humanitarian agencies are benefitting too. Driving from DRC’s capital Kinshasa to Tshikapa takes two days. Even reaching the city from the neighbouring provincial capital of Kananga, roughly 260 km away, is challenging.

“It’s a 10-hour drive from Kananga, under very difficult conditions,” says Philippe Onanaa, protection officer for the UN Refugee Agency (UNHCR) in Tshikapa. “UNHAS flights are helping us to quickly reach people in the field.”

In a bitter twist, however, UNHAS faces a funding crunch threatening to terminate its flights here from February, while in other parts of the country operations will be curtailed.

“If UNHAS flights stop coming … it will affect humanitarian access to people who need our assistance in a timely manner,” says Hamza Abdallah, deputy head of the service in DRC.

Aboard the Cessna, pilot Innocent Shuwu greets his passengers and tells them to buckle up.

Airport monitors shoo children off the runway. As the aircraft taxis, a small boy runs down the adjacent field, trying to keep pace.
He soon gives up, as the plane gathers speed. Then it is gone, flying over the green savannah and shrublands of Kasai province. 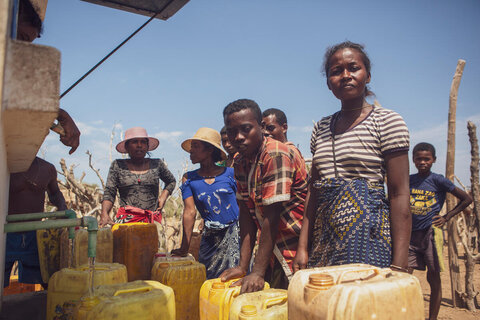