After almost 15 million people were forced to flee their homes, WFP and partner staff have been providing emergency assistance to some of Ukraine's most vulnerable families.
6 June 2022, Reem Nada
Conflicts Ukraine

For three months, Kharkiv city has been one of the most dangerous places in the world. Families who chose to remain have lived under heavy shelling and the security situation has only just started to improve. Many are still living in bomb shelters and are too scared to return to their homes.

Almost 15 million Ukranians are now displaced, and of these 8 million have remained in the country wondering if and when they will see their families and homes again.

Across the country, the World Food Programme has reached 2.2 million people in the past month alone. As conflict continues, levels of food insecurity are rising. One in three families don't have the food they need, and reaching highly vulnerable families has never been more important.

Families who are living in hard-to-reach areas within Kharkiv have paid a heavy price for months of conflict. They are experiencing shortages of food, water and essential supplies. Since the war began, WFP has reached nearly 1.6 million people in Kharkiv and Kharkivska province by working with partners, including volunteers from the Ukrainian Red Cross.

Luybov, Chuzhanova Nataliya and Ponomarenko are three mothers who have faced danger, fear and impossible choices since the war began. All three have chosen to live challenging lives underground while hoping that the war will end. With support from WFP, they are now able to ensure their families have enough food to eat while they face uncertain futures.

Seventy-four-year-old Luybov left home with her daughter, who is in her fifties, and her grandson, who is in his thirties. Her daughter has a disability, which made escaping the shelling especially challenging.

“The war started at night. We woke up to Kharkiv being bombed. We left our house in the morning, came to the bomb shelter and hid…it was scary,” says Luybov. The family have lived in the school's bomb shelter since.

During the first week the family shared the underground space with about 100 other people. Half of them have now left as the situation has gradually improved after the heavy attacks decreased in mid-May.

Most people in Kharkiv sought shelter in basements or subway stations, and these are now being cleared. However, some people continue to live in shelters as their houses have been destroyed, or are in north Kharkiv which remains too dangerous for families to return home.

Outside the bomb shelter, children of all ages play as children normally would. However, they know it is not where or how they are supposed to be living. This is not their house or their playground.

Four-year-old Kira and five year old Artem sing a song that dates back to the time of the Ukranian Cossacks. These were fierce warriors, much like the medieval knights of Western Europe or the Samurai of Japan.

Kira’s mother, Chuzhanova Nataliya, worries about their future. “It is scary to go back home for now, because there is a lot of shelling, especially during the night,” she says. “We can hear explosions. If you stay in the apartment, the walls are trembling – glass, windows, everything. That’s why it is scary to stay at home with a child.”

Chuzhanova does not only have little Kira to worry about – her eldest son, who is 19, has been drafted into the military. “I’d like the war to end as soon as possible so that our children could play as they used to before the war,” says the 40-year-old mother who has been living underground since the war started.

Mothers choke as they speak of what life had been like for them and their families. While they feel they are not alone and their needs are being met through WFP and partner organizations, this is not how they imagined their lives to be. And they do not see an end in sight. At least for now.

Ponomarenko, Artem’s mother, is no different. She and her husband grabbed Artem and his eldest brother Nikita, nine, and ran to this shelter at the beginning of the war. They have been living there since.

She goes to her house every day to cook for her family. She’s too scared to sleep in her house.

“We can go back to our house now, but all the windows are broken. We hear shelling during the night, and I am scared to go back there with the children…if it weren't for the children then, maybe, we’d go back. But for now, we will stay in the shelter,” she says.

The basement is not as crowded as it was at the beginning of the war. However, there are little comforts and no private space. Families share a living space, sleep on mattresses strewn against both sides of the shelter, and cook simple meals on an electric stove as there is no kitchen.

Lyubov says that over the past months, laughter has been mixed with tears. Her son fled to Poland at the beginning of the war with his then-pregnant wife. She now has a new granddaughter in Poland and and does not know when they will ever meet. The couple’s home has been destroyed and have no life to return to in Ukraine.

Lyubov has a dream: “I dream about peace on Earth. This should not be repeated. People should be living in harmony, and bring up their children and grandchildren (in peace).” 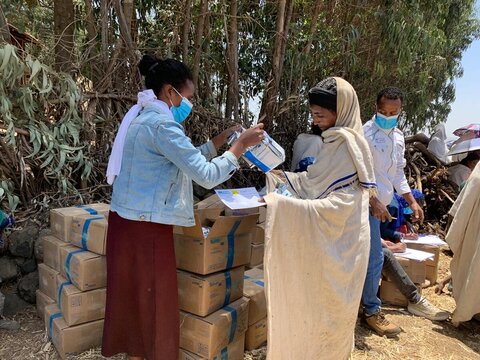